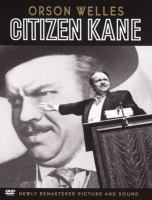 An American tragedy of a newspaper tycoon, from his humble beginnings to the solitude of his final years. Nominated for nine Academy Awards including Best Picture and Director. Bonus features include commentary by Roger Ebert.

In English; with optional subtitles in English, French, Portuguese or Spanish.

Originally produced as a motion picture in 1941.

Citizen Kane: The story of Charles Foster Kane, a newspaper tycoon whose life is investigated by a magazine reporter trying to discover the meaning of Kane's dying word: "Rosebud".

The battle over Citizen Kane: Examines the lives of William Randolph Hearst, the powerful newspaper magnate, and director/actor, Orson Welles as they clashed over Welles first film: "Citizen Kane". Hearst's reaction upon learning about the film, which portrayed him unfavorably, was to work to suppress it and destroy Welles. Major movie theater chains refused to show "Citizen Kane", and Welles' masterpiece virtually disappeared for almost 25 years. Never again would Orson Welles gain control of a major Hollywood production.

"For private home use in the USA and Canada only" -- Container.