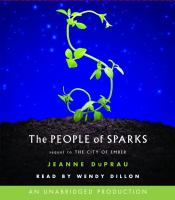 The people of Sparks [sound recording] /

The People of Sparks picks up where The City of Ember leaves off. Lina and Doon have emerged from the underground city to the exciting new world above, and it isn't long before they are followed by the other inhabitants of Ember. The Emberites soon come across a town where they are welcomed, fed, and given places to sleep. But the town's resources are limited and it isn't long before resentment begins to grow between the two groups. When anonymous acts of vandalism push them toward violence, it's up to Lina and Doon to discover who's behind the vandalism and why, before it's too late.<br> <br> <br> From the Hardcover edition.

Sequel to: The City of Ember.

When the resources of the city of Sparks start depleting, the people from Ember face resentment from the villagers of Sparks. Lina and Doon have to find a way to bring the two peoples together.

(Intermediate, Middle School) Lina, Doon, and four hundred others have safely escaped from their imperiled underground City of Ember (rev. 5/03), but the town they find to take them in offers only conditional haven. For six months, they are told, the people of Sparks will help them, but relations between the two groups unravel well before the deadline. Fans of the exciting first book will surely want to continue the adventure here, but this sequel is comparatively uneventful and talky, and Lina and Doon don't have enough to do. DuPrau's characterization of the Sparks community, however, is as considered as her picture of Ember was in the first book. Ember had plumbing and electricity but few natural resources; Sparks supplements its agrarian subsistence with the scavenging of rubbish from the civilization (ours, one infers) destroyed generations before. The contrast and conflict between the groups are interesting in a social-sciences kind of way, so while the book is less story than situation, there's plenty to discuss. (c) Copyright 2010. The Horn Book, Inc., a wholly owned subsidiary of Media Source, Inc. No redistribution permitted. All rights reserved.