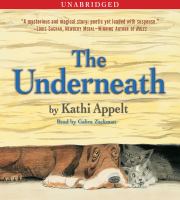 The underneath [sound recording] /

There is nothing lonelier than a cat who has been loved, at least for a while, and then abandoned on the side of the road.<br> <br> An abandoned calico cat, about to have kittens, hears the achingly lonely howl of a chained up, abused hound dog deep in the bayou. She dares to find him in the forest and the hound dares to befriend this cat, this feline, this creature he is supposed to hate. They are an unlikely pair, about to become an unlikely family. Ranger urges the cat to hide underneath the porch, to raise Sabine and Puck there because Gar-Face, the man living inside the house, will surely use her or her kittens as alligator bait should he find them. But, they are safe in the underneath...as long as they stay in the underneath.<br> <br> Kittens, however, are notoriously curious creatures. And one kitten's one moment of curiosity sets off a chain of events that is astonishing, remarkable, and enormous in its meaning. In the tradition of Marjorie Kinnan Rawlings, Flannery O'Connor, and Carson McCullers, Kathi Appelt spins a harrowing yet keenly sweet tale about the power of love (and its opposite, hate), the fragility of happiness -- and the importance of making good on your promises.

An old hound that has been chained up at his hateful owner's run-down shack, and two kittens born underneath the house, endure separation, danger, and many other tribulations in their quest to be reunited and free.

(Intermediate) Deep among the Texan bayous, underneath a ramshackle cabin, an abandoned cat seeks refuge. Above lives Gar Face -- the scarred, embittered, unredeemable product of a loveless, abusive childhood. Gar Face embodies cruelty and hate; yet his battered, ill-fed old bloodhound, Ranger, welcomes the cat; soon, with newborn kittens Sabine and Puck, they've made a loving, loyal family. Counterpointing the animals' present-day story is another that reaches back centuries. Aspects of nature itself are personified as ancient beings: poisonously wicked old Grandmother Moccasin, a lamia (snake-woman) trapped under a loblolly pine for a thousand years, plotting revenge for the loss of her shape-changing daughter; the mammoth alligator that Gar Face, ignorant of its venerable power, hopes to kill. Watching over all are the birds and the sentient trees; making a litany of the trees' multitudinous names, Appelt spins a lyrical, circling narrative, Homeric in its cadenced repetitions. Gar Face's discovery of the family "Underneath" is a catastrophe. Puck is set adrift, desperately seeking a way home. Meanwhile, the lamia's long past unfolds, reaching its denouement in the same moment that the animals' ordeal comes to its swift-paced end. Easily read, with many brief chapters and full of incident, its endearing characters (and scary ones, too) well realized in Small's excellent full-page drawings, this fine book is most of all distinguished by the originality of the story and the fresh beauty of its author's voice -- a natural for reading aloud. From HORN BOOK, (c) Copyright 2010. The Horn Book, Inc., a wholly owned subsidiary of Media Source, Inc. No redistribution permitted.