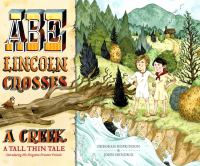 This ALA-ALSC Notable Children's Book and "Booklist" Editors' Choice is an ingenious historical fiction picture book about the 16th president of the United States, Abraham Lincoln. It's a tale of two boys who get themselves into more trouble than bear cubs in a candy store. <br>The year is 1816. Abe is only seven years old, and his pal, Austin, is ten. Abe and Austin decide to journey down to Knob Creek. The water looks scary and deep, and Austin points out that they don't know how to swim. Nevertheless, they decide to traverse it. I won't tell you what happens, but let's just say that our country wouldn't be the same if Austin hadn't been there to help his friend. <p>"From the Hardcover edition."

In Knob Creek, Kentucky, in 1816, seven-year-old Abe Lincoln falls into a creek and is rescued by his best friend, Austin Gollaher.

Abe Lincoln, a storyteller of great repute, would be hard-pressed to beat Hopkinson's considerable skill in recounting this incident from childhood, in which Lincoln's friend Austin Gollaher saved him from drowning in the rushing waters of Kentucky's Knob Creek. Hopkinson speaks directly to readers, saying of her tale: "I like it so well, I've asked my friend John to help out by drawing some pictures." Even though this slice of historical fiction is set "on the other side of yesterday, before computers or cars, in the year 1816," metafictive elements (Hopkinson's personal comments; Hendrix's illustrations that often appear in situ on the drawing board, with pen or pencil still on the page) provide immediacy. Best of all, Hopkinson addresses the unknowns in history when she recounts how Austin saves young Abe. "He pulls Abe out by his shirttail. Or maybe he uses a sycamore branch -- or a fishing pole. We'll let John decide which sketch to paint. For that's the thing about history -- if you weren't there, you can't know for sure." Add that thought to a rousing telling, and here's a story worth waiting one hundred and ninety-two years for.From HORN BOOK, (c) Copyright 2010. The Horn Book, Inc., a wholly owned subsidiary of Media Source, Inc. No redistribution permitted.