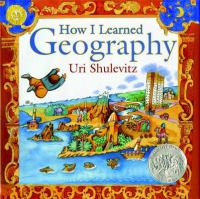 How I learned geography /

<p>Having fled from war in their troubled homeland, a boy and his family are living in poverty in a strange country. Food is scarce, so when the boy's father brings home a map instead of bread for supper, at first the boy is furious. But when the map is hung on the wall, it floods their cheerless room with color. As the boy studies its every detail, he is transported to exotic places without ever leaving the room, and he eventually comes to realize that the map feeds him in a way that bread never could.</p> <p>The award-winning artist's most personal work to date is based on his childhood memories of World War II and features stunning illustrations that celebrate the power of imagination. An author's note includes a brief description of his family's experience, two of his early drawings, and the only surviving photograph of himself from that time.<br> How I Learned Geography is a 2009 Caldecott Honor Book and a 2009 Bank Street - Best Children's Book of the Year.</p>

As he spends hours studying his father's world map, a young boy escapes the hunger and misery of refugee life. Based on the author's childhood in Kazakhstan, where he lived as a Polish refugee during World War II.

(Primary) Though Shulevitz's story is catalogued as fiction, his concluding note suggests that it is close to fact (early in World War II, he and his parents "fled empty-handed" from Warsaw to Kazakhstan, where they remained for six years). The book focuses on a transformative incident in the city of Turkestan: one hungry evening, Father brings home a map instead of bread ("I had enough money to buy only a tiny piece...we would still be hungry," he explains). Understandably, the famished boy and his mother are angry at this quixotic purchase. Still, once the huge map is hung on the wall, the boy is entranced -- studies its bright patterns, copies it, strings the exotic place names into rhymes, and dreams he's exploring the world, from beaches to ice-clad mountains, tropical forests to cities. In Shulevitz's skillfully composed, emotionally charged art, evocative scenes of the family leaving war-torn Europe on foot and traversing Asia's "dusty steppes," with its dour, angular villages, give way to the dreamlike splendor of the boy's escape into imagination. "I forgave my father. He was right, after all." Though appropriate for younger children, this is a natural to pair with Peter S?s's The Wall (rev. 9/07) for its depiction of a gifted young artist finding inspiration and expressing himself despite profoundly daunting circumstances. (c) Copyright 2010. The Horn Book, Inc., a wholly owned subsidiary of Media Source, Inc. No redistribution permitted. All rights reserved.