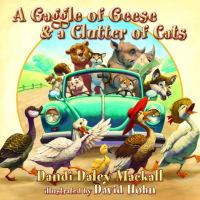 A gaggle of geese & a clutter of cats /

" Tidings of magpies,<br> Ducks in a brace ,<br> Elks in a gang , in a galloping race." <br> <br> This joy-filled romp through creation captures your child's imagination with the silly-sounding (but true) names of animal groups. Rhythmic verse celebrates the wonder of God's imagination displayed in his creatures-- from a clutter of cats and a mischief of rats to an army of frogs and a drift of fat hogs.<br> <br> Along with all the wild, wacky, and winsome animals, this rollicking adventure leads children to an unexpected encounter with a most unusual grouping, one that reveals God's greatest artistry and creativity: a blessing of kids.