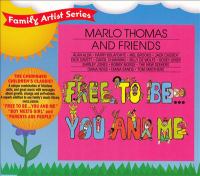 Free to Be...You and Me, which was originally released in 1972, continues its domination of the children- (or in this case, grandchildren-) of-hippies market with its latest reissue on Arista and Legacy Recordings under the Family Artist Series. With songs and poems that emphasize the importance of staying true to oneself, respecting others, tolerance, and dispelling societally constructed stereotypes, Marlo Thomas and friends (including Alan Alda, Harry Belafonte, Diana Ross, and Mel Brooks) offer a kind and fun way to deal with these issues. From the self-explanatory title song to ex-NFL lineman Rosey Grier's slightly funky (complete with a wah wah guitar solo) "It's All Right to Cry," about the benefits and normalcy of expressing emotions, from "Parents Are People" to the skit "Boy Meets Girl," about the inaccuracy of assigned gender roles, each track on the album aids in continuing this message of understanding. Being that Thomas herself was an active feminist, and the original proceeds went towards the Ms. Foundation For Women (and both Ms. Magazine's Children's Feature Editor Letty Cottin Pogrebin and Editor-In-Chief Gloria Steinem contributed to the liner notes), it's unsurprising that so much of the record focuses on gender-based stereotypes, but Thomas and the songwriters are careful to approach the issue from the female and male perspectives, showing that both are equally affected. They also make learning about these problems enjoyable, incorporating animals, quirky rhymes, catchy songs, and images of children playing, so that the album doesn't come across as heavy handed or preachy. Rather, it's the effort of a group of people who were concerned about the societal pressures their children (and nieces, as in Thomas' case) were facing and wanted to do something about it. And what they created, Free to Be...You and Me, in its more than 30-year lifespan, has proven itself as a useful tool in that cause. ~ Marisa Brown

A number of songs, stories, and poems which demonstrate that people can choose to do or be whatever they desire.