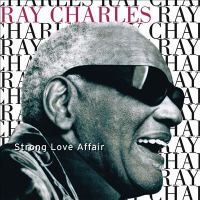 Once he signed to Warner Bros., Ray Charles adopted the '90s superstar schedule, releasing an album every three years. Strong Love Affair, the third of them (now on Quincy Jones's custom label, Qwest), is a self-production that finds Charles performing his usual mix of blues, R&B, and pop on a set of newly written songs. The material is serviceable, if generic, but what matters is Charles's typically expressive vocal performance. At 65, Charles may no longer be able to surprise us, but he doesn't seem ready to retire, and if new recordings from him risk redundancy and irrelevance, at their best they nevertheless can represent Charles as well as his earlier, revolutionary work. Strong Love Affair never tries to conform Charles to anything other than his eclectic self, and it never gets in his way. ~ William Ruhlmann