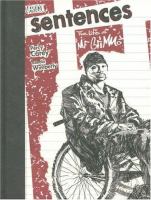 Written by Percy Carey Art and cover by Ronald Wimberly Underground rap icon Percy Carey tells the true story of his life in the "Hip-Hop Game" - the dizzying heights and heartbreaking losses - in the raw and brutally honest hardcover graphic novel memoir SENTENCES: THE LIFE OF M.F. GRIMM. In SENTENCES, Carey chronicles his life in the sometimes glamorous, and often violent, hip-hop industry; from the first time he picked up a microphone at a block party as a youngster, to the day he lost the use of his legs to gang violence, to his incarceration, and eventually, to his self-reinvention and rise back to the top of his game, becoming a Hip-Hop Grand Master and being placed among the pantheon of the culture. No questions are left unanswered and no apologies are made, resulting in what's sure to be a groundbreaking graphic novel. Joining Carey is up-and-coming artist Ronald Wimberly (LUCIFER, HELLBLAZER: PAPA MIDNITE covers), who breathtakingly illustrates this gritty tale of righteous redemption. If what you know about hip-hop is the flashy cars and voluptuous women that music videos try to sell, be prepared to experience the real side of the industry that only someone who has survived the rise, fall, and rise again, can tell.

" ... Percy Carey tells his own personal tale about his rise, fall, and rise again through the ranks of the hip-hop industry"--p. [4] of cover.