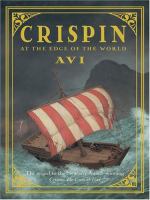 Crispin : at the edge of the world /

In this riveting sequel to the Newbery Award-winning Crispin: The Cross of Lead--the second book in a planned trilogy--Avi explores themes of war, religion, and family as he continues the adventures of Crispin and Bear.

Sequel to: Crispin, the cross of lead.

Branded as traitors by the king's authorities, Crispin and his guardian, Bear, flee to coastal towns in fourteenth-century England, where they perform a musical juggling act and bond as a family after befriending a disfigured girl.

(Intermediate, Middle School) Picking up directly where Crispin: The Cross of Lead (rev. 9/02) left off, this tale finds Crispin and his newly rescued mentor, the minstrel Bear, making their way across the English countryside, one step ahead of Bear's former confederates in revolution, who are certain he has sold them out. When Bear is wounded in a hostile encounter, the two are forced to seek shelter with Aude, an old wise woman, and Troth, her cleft-lipped apprentice. Avi plays the metaphor of the edge of the world deftly: the literal edge -- the coastline -- offers false hope of escape, while Crispin finds himself continually expanding his own conceptual edges. The deeply Catholic Crispin struggles with Aude and Troth's adherence to older gods; then with the possibility that Bear, like all humans, has feet of clay; and finally with the necessity of living life without his protector. Like its predecessor, this offering fairly reeks with fourteenth-century detail, the offhand brutality of the age showing itself again and again. The inevitably somber ending yet leaves Crispin with a friend -- Troth -- and the determination to live free. An author's note provides historical context. (c) Copyright 2010. The Horn Book, Inc., a wholly owned subsidiary of Media Source, Inc. No redistribution permitted. All rights reserved.