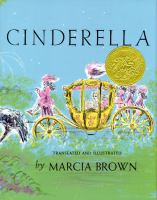 Cinderella, or, The little glass slipper : a free translation from the French of Charles Perrault /

A magical adaptation Charles Perrault's French classic that has been translated and illustrated by Marcia Brown, earning her the Caldecott Medal as well as the love of children everywhere. <br> <br> Even in rags, Cinderella is a hundred times more beautiful than her cruel stepsisters. And how she wishes to go to the prince's ball! But her sisters delight in telling her that people would only laugh at her at the palace. Fortunately, Cinderella is blessed with a fairy godmother who can turn pumpkins into golden coaches, lizards into footmen, and rags into riches. At the ball, Cinderella will have the most thrilling night of her life--until the stroke of midnight!

Cindrella is abused and exploited by her stepmother and stepsisters after her father's remarriage, but she is able to attend a royal ball with the help of her fairy godmother. The king's son falls in love with her, and when she is forced to flee at midnight, the prince is able to locate her with the glass slipper she left behind. Because she is good, Cinderella accepts her stepsisters' apologies and forgives them, allowing them to share her good fortune.