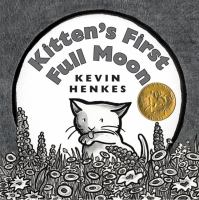 When Kitten mistakes the full moon for a bowl of milk, she ends up tired, wet, and hungry trying to reach it.

(Preschool) Henkes takes a break from his signature mice--and from illustrating in color--to tell this sweet story about a kitten who thinks the full moon is a bowl of milk. The black-and-white forms, with subtle gradations of gray, are larger and more solid-looking than Henkes's usual work, with less interior line. Nevertheless, the kitten, whose white fur glows against the charcoal-gray sky like the moon she desires, is sprightly and expressive as she fails repeatedly (""Poor Kitten!"") to get at that milk. Small children, for whom the rhythmic, action-oriented text is just right, will appreciate the gentle slapstick of the kitten getting a firefly on her tongue when she tries to lick the moon and getting drenched in the pond when she tries to drink the moon's reflection. Anyone who has ever watched a cat spasmodically pounce and chase for no apparent reason will enjoy the imaginative, unpretentiously poetic method Henkes reads into this madness. (c) Copyright 2010. The Horn Book, Inc., a wholly owned subsidiary of Media Source, Inc. No redistribution permitted. All rights reserved.