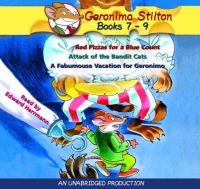 Who is Geronimo Stilton?<br>That's me I run a newspaper, but my true passion is writing adventure stories. Here in New Mouse City, the capital of Mouse Island, my books are all bestsellers My stories are funny, fa-mouse-ly funny. They are whisker-licking-good tales, and that's a promise <br> <br>Red Pizzas for A Blue Count<br> My troublemaker cousin was trapped in Transratania And before I could even squeak, my sister, Thea, dragged me along on her rescue mission. Little did we know that Transratania is the land of vampire bats Holey cheese, bats give me goose bumps <br> Attack of the Bandit Cats<br> Captured by cats It's every rodent's worst nightmare. It al started when my cousin Trap convinced me to join him on a quest for a legendary island covered in silver. But before you could say "hot cheese on toast," we were attacked by a ship of pirate cats <br> A Fabumouse Vacation for Geronimo <br> Sometimes a busy businessmouse like me needs a nice, relaxing vacation. But everytime I tried to get away, disaster struck By the time I finally tore myself away from The Rodent's Gazette , all the good trips were booked up. I found myself stuck in a flea-ridden old hotel, sharing a room with a bunch of Gerbil Scouts

Translated from the Italian.

Presents three stories about the adventures of the mouse journalist in which he goes on a rescue mission to a land of vampire bats, is attacked by a ship of pirate cats, and takes a vacation only to find himself rooming with Gerbil Scouts.