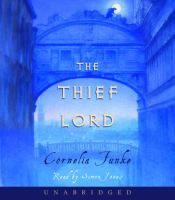 Prosper and Bo are orphans on the run from their cruel aunt and uncle. The brothers decide to hide out in Venice, where they meet a mysterious thirteen-year-old who calls himself the "Thief Lord." Brilliant and charismatic, the Thief Lord leads a ring of street children who dabble in petty crimes. Prosper and Bo delight in being part of this colorful new family. But the Thief Lord has secrets of his own. Soon the boys are thrust into circumstances that will lead them to a fantastic, spellbinding conclusion. <br>Winner of the 2000 Zurich Children's Book Award and the 2001 Children's Book Award from the Vienna House of Literature. <p> From the Cassette edition.

Orphaned brothers Prosper and Bo, having run away from their cruel aunt and uncle, decide to hide out in Venice where they fall in with the Thief Lord, a thirteen-year-old boy who leads a crime ring of street children.

(Intermediate) The story opens with a solitary bachelor detective, Victor, accepting a commission to find two runaway brothers: Prosper, the older boy (who is not wanted); and Boniface, or Bo, who looks like an angel and is therefore dear to his childless (and humorless) aunt. The brothers have run away to Venice to avoid being separated and are living with a gang of thieving orphans presided over by the boyish, cocky Thief Lord. As Victor's sympathies begin to shift from the aunt to the brothers, the gang of thieves becomes entangled in a caper that involves stealing a wooden wing from a carved lion-the missing piece of a carousel that magically turns old people young again and makes children grow to adults in an instant. The problem is not the wing's owner, artist Ida Spavento-she actually helps them, provided she can follow along to discover where the wing will be taken. The real complication is the Thief Lord, whose identity turns out to be smaller-than-life and whose attraction to the magic of the carousel draws the gang into further danger. The story moves at a slow pace, lingering in explanatory dialogue and descriptions of Venice, but the idiosyncrasy and resonance of the central carousel image create a potent, continental atmosphere that laces the tale with a bit of excitement. In the course of pursuing the carousel's mystery, Victor and Ida and the brothers fob off Prosper and Bo's aunt with the kind of child she really wants and band together as a new kind of family-a sweet and comforting conclusion that will satisfy readers whose hearts have been touched by the loyalty and courage of the two brothers and the rewarded generosity of their new foster parents. (c) Copyright 2010. The Horn Book, Inc., a wholly owned subsidiary of Media Source, Inc. No redistribution permitted. All rights reserved.