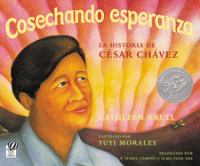 When Cesar Chavez led a 340-mile peaceful protest march through California, he ignited a cause and improved the lives of thousands of migrant farmworkers. But he wasn't always a leader. As a boy he was shy, soft-spoken, and teased at school. He lived in ramshackle sheds and slaved as a field hand. He knew things had to change, and he thought that--maybe--he could help change them. So Cesar took charge. He spoke up--and an entire country listened.<br> <br> An author's note provides context for the life of the inspiring civil rights leader.

A biography of Cesar Chavez, from age ten when he and his family lived happily on their Arizona ranch, to age thirty-eight when he led a peaceful protest against California migrant workers' miserable working conditions.

This edition of [cf2]Harvesting Hope[cf1] brings the story of the Latino labor leader to a Spanish-speaking audience. The well-translated text creates a complex view of Chávez, and the mixed-media folk-styled paintings are suffused with a variety of emotions. From HORN BOOK Spring 2004, (c) Copyright 2010. The Horn Book, Inc., a wholly owned subsidiary of Media Source, Inc. No redistribution permitted.