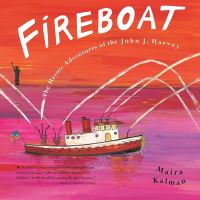 Fireboat : the heroic adventures of the John J. Harvey /

* "A hundred years from now, when people want to know what we told our children about 9/11, Kalman's book should be among the first answers."-- Booklist , starred review <br> <br> * "Intelligently conveys those unfathomable events in a way that a picture book audience can comprehend. . . . With this inspiring book, Kalman sensitively handles a difficult subject in an age-appropriate manner."-- Publishers Weekly , starred review <br> <br> * " Fireboat does many things. It sets forth an adventure, helps commemorate an anniversary, offers an interesting bit of history, celebrates the underdog, and honors the fire-fighting profession. Children and adults will respond to it in as many ways."-- School Library Journal , starred review <br> <br> * "Exciting, uplifting, and child-sensitive. . . . Revisits the tragedy without the terror and conveys pride without preachiness."-- The Bulletin of the Center for Children's Books , starred review <br> <br> * "Quintessential New York artist Kalman gives us an idiosyncratic but informative look at a Big Apple institution. . . . Kalman's use of the events of September 11 is honest and honorable, and rarely is she as straightforward as she is here."-- The Horn Book , starred review<br> <br> This is the inspiring true story of the John J. Harvey--a retired New York City fireboat reinstated on September 11, 2001. Originally launched in 1931, the Harvey was the most powerful fireboat of her time. After the September 11 attacks, with fire hydrants at Ground Zero inoperable and the Hudson River's water supply critical to fighting the blaze, the fire department called on the Harvey for help. There were adjustments--forcing water into hoses by jamming soda bottles and wood into nozzles with a sledgehammer--and then the fireboat's volunteer crew pumped much-needed water to the disaster site. The John J. Harvey proved she was still one of New York's Bravest!<br> <p><br> Maira Kalman brings a New York City icon to life, celebrating the energy, vitality and hope of a place and its people.</p>

A fireboat, launched in 1931, is retired after many years of fighting fires along the Hudson River, but is saved from being scrapped and then called into service again on September 11, 2001.

Author/illustrator Kalman tells the inspiring story of the many heroes of 9/11-among them the crew of a restored fireboat who provided invaluable support to New York City during its hour of need. (SLJ 9/02) (c) Copyright 2011. Library Journals LLC, a wholly owned subsidiary of Media Source, Inc. No redistribution permitted.

(Primary) Much as she did in Next Stop Grand Central (rev. 5/99), quintessential New York artist Kalman gives us an idiosyncratic but informative look at a Big Apple institution, albeit one rather less known. With nimble insouciance, Kalman brings us the launching of the John J. Harvey fireboat in 1931, shows off her features, and gives a nod to the times (""the tasty candy treat Snickers hit the stores"") and to the crew (which included a dog named Smokey, ""who did not put out the fires but had many nice spots""). The years pass, and the fireboat is worn-out and retired, but she gets fixed up in 1995 by a group of civic-minded New Yorkers. The John J. Harvey might have spent her golden years toot-toot-tooting down the river, but-and a dark, gray, pictureless page calls a full stop to Kalman's seemingly irrepressible palette of colors-""but then on September 11, 2001 something so huge and horrible happened that the whole world shook."" The page turn reveals a double-page spread of an iconic image of two planes flying toward the towers, while another turn reveals the impact: ""The sky filled with fire and smoke. The buildings exploded and fell down to the ground. Many people were hurt. Many lives were lost."" And the John J. Harvey found herself of service again. From a perusal of the first several pages, parents might not guess this isn't another Little Toot, but Kalman's use of the events of September 11 is honest and honorable, and rarely is she as straightforward as she is here. (c) Copyright 2010. The Horn Book, Inc., a wholly owned subsidiary of Media Source, Inc. No redistribution permitted. All rights reserved.