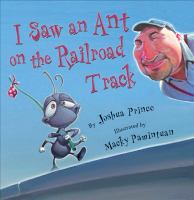 I saw an ant on the railroad track /

<p> The liveliest rhythm and rhyme, and really cool art, carry children off on a captivating journey along the railroad tracks with a hungry little ant and the gentle giant of a switchman who cares for him. <br> <br> Well, I saw an ant on the railroad track.<br> The rail was bright.<br> The ant was black.<br> He was walking along, tickety tack.<br> (That's the sound of an ant on a railroad track.) <br> <br> What an entertaining trip this is! Children will delight in the playful and musical language, endearing and uniquely styled illustrations, and wonderfully warm story that make this picture book so special. When switchman Jack, eating lunch by his shack, spies an ant walking along the railroad track, he immediately gets worried: it's an eastbound ant on the westbound track, and that means a train could run SMACK into the little guy. He knows he has to do something to help... Youngsters will feel gratified and reassured by Jack's affection for the tiny creature: after all, they--just like the ant--are very small in a big world. And they'll really love the way the adorable little bug has the smarts to save itself!</p>

Jack, a railroad switchman, frantically tries to save an ant who is heading east on a westbound track, straight into the path of an oncoming freight train.

What will happen to an eastbound ant searching for a snack on a westbound railroad track? Switchman Jack pulls the switch, but it's stuck, and the train keeps coming. At the last second, the ant, spotting Jack's lunch on the ground, hops off the track and all ends happily. The lively rhyme and energetic illustrations capture the drama of this tall tale. (c) Copyright 2010. The Horn Book, Inc., a wholly owned subsidiary of Media Source, Inc. No redistribution permitted. All rights reserved.