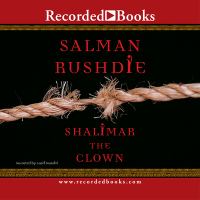 In the small village of Pachigam, in India-occupied Kashmir, Shalimar is the village headman's son. By 14, he is an accomplished tightrope walker in the local performing troupe. Shalimar, a Muslim, falls in love with Boonyi, the daughter of a Hindu neighbor. When the two are caught trysting one night, the Pachigam council of elders decides that the two teenagers must marry to save face. Meanwhile Kashmir is becoming a battleground between the enemy nations of India and Pakistan. It is only a matter of time before the effects of this conflict will begin to unravel daily life in Pachigam. Max Ophulus, the newly-appointed American ambassador to India, visits Pachigam on a goodwill tour. He is treated to a performance by the village troupe, where Boonyi is the featured dancer. Max, an insatiable womanizer, woos Boonyi, and the two elope to New Delhi. Swearing revenge on Boonyi and her lover, Shalimar, abandons his role as circus performer and begins a journey that will take him halfway around the globe and into a complex moral confrontation.

The title hides how dark this novel can be, as Shalimar is not a clown but a trained terrorist and assassin who murders the former U.S. ambassador to India outside his daughter's doorway. The victim, Max Ophuls, had been a secretive figure in the world of counter-terrorism, beginning in World War II Europe. Rushdie captures current concerns with skill and keen insight, as shown in Shalimar's ability to gain Ophuls's trust, a scary and very true lesson in deception. This tangled web of history, both personal and political, creates a complex narrative that might be hard to follow at times in audio form. Some characters aren't fully developed, but the larger themes of love, betrayal, secrets, and family dissension are strongly sustained. Narrated by Aasif Mandvi, Shalimar is recommended for serious audiobook clientele.-Joyce Kessel, Villa Maria Coll., Buffalo, NY (c) Copyright 2010. Library Journals LLC, a wholly owned subsidiary of Media Source, Inc. No redistribution permitted.