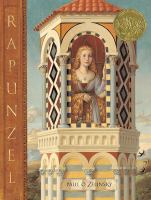 BookPublisher: New York : Dutton Children's Books, c1997Edition: 1st ed.Description: 1 v. (unpaged) : col. ill. ; 30 cm.ISBN: 0525456074 (hardcover) :.Title notes: c.1 $16.99 7-99Subject(s): Fairy tales | FolkloreSummary: A retelling of a folktale in which a beautiful girl with long golden hair is kept imprisoned in a lonely tower by a sorceress. Includes a note on the origins of the story.
List(s) this item appears in: Caldecott Medal Winners and Honor Books Awards: Click to open in new window

Surely among the most original and gifted of children's book illustrators, Paul O. Zelinsky has once again with unmatched emotional authority, control of space, and narrativecapability brought forth a unique vision for an age-old tale. Few artists at work today can touch the level at which his paintings tell a story and exert their hold. <p>Zelinsky's retelling of Rapunzel reaches back beyond the Grimms to a late-seventeenth-century French tale by Mlle. la Force, who based hers on the Neapolitan tale Petrosinella in a collection popular at the time. The artist understands the story's fundamentals to be about possessiveness, confinement, and separation, rather than about punishment and deprivation. Thus the tower the sorceress gives Rapunzel here is not a desolate, barren structure of denial but one of esoteric beauty on the outside and physical luxury within. And the world the artist creates through the elements in his paintings the palette, control of light, landscape, characters, architecture,interiors, costumes speaks to us not of an ugly witch who cruelly imprisons a beautiful young girl, but of a mother figure who powerfully resists her child's inevitable growth, and of a young woman and man who must struggle in the wilderness for the self-reliance that is the true beginningof their adulthood.</p> <p>As ever, and yet always somehow in newly arresting fashion, Paul O. Zelinsky's work thrillingly shows us the events of the story while guiding us beyond them to the truths that have made it endure.</p>

A retelling of a folktale in which a beautiful girl with long golden hair is kept imprisoned in a lonely tower by a sorceress. Includes a note on the origins of the story.

<opt> <anon I1="BLANK" I2="BLANK">Award winning author/adapter/illustrator Paul O. Zelinsky's Caldecott Medal Winning book! Perfect for readers of all fairy tales. "A breathtaking interpretation gives the fairy tale new art-historical roots, with illustrations that daringly-and effectively-mimic the masters of Italian Renaissance painting."-- Publishers Weekly Trapped in a tower with no door, Rapunzel is allowed to see no one but the sorceress who has imprisoned her-until the day a young prince hears her singing to the forest birds. . . . The timeless tale of Rapunzel is vividly and magnificently brought to life through Paul O. Zelinsky's powerful sense of narrative and his stunning oil paintings. "Simply put, this is a gorgeous book; it demonstrates respect for the traditions of painting and the fairy tale while at the same time adhering to a singular, wholly original, artistic vision." ( The Horn Book , starred review) Excerpted from Rapunzel by Wilhelm K. Grimm, Jacob Grimm All rights reserved by the original copyright owners. Excerpts are provided for display purposes only and may not be reproduced, reprinted or distributed without the written permission of the publisher.</anon> </opt>

(Younger) A folklike story set in China tells of Mi Fei, an artist who skillfully paints the stories of gods and heroes on paper scrolls while living simply in his village, surrounded by loving neighbors. When alarming news comes that a great dragon has awakened from its hundred-years' sleep and is destroying the countryside, Mi Fei, at the villagers' behest, takes his scrolls and paints and journeys to the dragon's mountain. There, he encounters the fiery breath and lashing tail of the terrifying creature and learns that before the dragon can return to his slumber, someone must perform three tasks, or be devoured. Mi Fei is frightened, but clever, and he uses his beloved scrolls and his love for the people of his village to successfully complete the tasks. In the end, the gigantic dragon fades away until all that remains is a small paper version of himself. In an extraordinary feat of artistry, Sabuda uses the triple-page gate-fold illustrations both to relate the story in the style of Chinese scrolls and to capture the drama of the confrontation between the gentle artist and the awe-inspiring dragon. Each picture is cut from painted tissue paper created by Sabuda and placed on a background of handmade Japanese paper. The combination of the ever-increasing size of the dragon (climaxing in a picture of his teeth framing an entire spread) and the cleverness of Mi Fei creates a strong tale with plenty of action for the story-hour audience. h.b.z. Bob Graham Queenie, One of the Family; illus. by the author (Preschool, Younger) This warm family story begins on the opening endpapers as a bantam hen stands at the edge of a soft blue lake. Baby Caitlin and her mom and dad, walking in the countryside, soon spot the hen floundering in the lake, and Dad leaps in for a daring rescue. They warm the hen and bring her home, and "that might have been the end of the story...but it wasn't!" The hen, dubbed Queenie, soon becomes one of the family, taking over the dog's basket and witnessing Caitlin's first steps. But Caitlin's mom knows Queenie has another home, so the whole family sets off to return her to a nearby farm. "That might have been the end of the story...but it wasn't." Queenie returns each morning to lay a perfect brown egg in Bruno's basket, just right for Caitlin's breakfast or for baking a birthday cake. When a new baby arrives and Caitlin forgets to collect the eggs, Bruno hatches a litter of chicks. The immensely appealing animals and people are depicted in gentle watercolors with loose, comfortable lines. Th (c) Copyright 2010. The Horn Book, Inc., a wholly owned subsidiary of Media Source, Inc. No redistribution permitted.