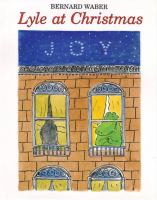 Christmas is an especially festive time for everyone's favorite crocodile, Lyle. Lyle loves Bird and Loretta the cat, who live with Mr. Grumps. He loves East 88th Street, the house he shares with the Primms and his mother. Lyle's only problem is that he can't decide what he wants for Christmas. However, not everyone is filled with holiday cheer. Mr. Grumps has the holiday blahs--so much so that even his adored cat, Loretta, has had it with miserable Mr. Grumps. And then, just a few days before Christmas Loretta disappears and the entire neighborhood joins Mr. Grumps in the hunt for the lost cat. Will he be able to find Loretta before Christmas and restore the holiday cheer to East 88th Street?

(Preschool) It is a pleasure to have our old friend Lyle back with a Christmas story. Lyle and his family are enjoying the season, ice-skating at Rockefeller Center, exchanging hugs with friends, deciding what they want for Christmas. But their friend Mr. Grumps is in the dumps. Nothing they do can cheer him up; he is resolutely miserable. Then he loses his cat, Loretta. Lyle and the Primms search high and low, their friends search high and low, and Lyle realizes that what he wants for Christmas is Loretta's safe return. Loretta, who has run away to escape the gloom at home, is fortunately picked up by Prunella Kitt, a cat lady, who takes her home to add to her (approximately) thirty-four cats. There she is seen by Lyle's old friend Hector P. Valenti, Star of Stage and Screen, who tells Lyle's family. This complex plot is further complicated by Lyle's taking over Hector's cleaning job and being arrested for housebreaking. But all ends well with a dinner party and Hector schmoozing up to Prunella Kitt, with very honorable intentions, to be sure, and a happy Christmas for all. Just perfect for a holiday book: good wishes, a great party, and a blissful reunion of old comrades. a.a.f. (c) Copyright 2010. The Horn Book, Inc., a wholly owned subsidiary of Media Source, Inc. No redistribution permitted.