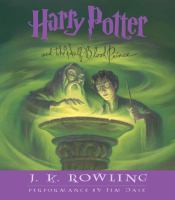 The war against Voldemort is not going well: even Muggle governments are noticing. Ron scans the obituary pages of The Daily Prophet looking for familiar names. Dumbledore is absent from Hogwarts for long stretches of time, and the Order of the Phoenix has already suffered losses.<br> <br> And yet...<br> <br> As in all wars, life goes on. Sixth-year students learn to Apparate--and lose a few eyebrows in the process. The Weasley twins expand their business. Teenagers flirt and fight and fall in love. Classes are never straightforward, though Harry receives some extraordinary help from the mysterious Half-Blood Prince.<br> <br> So it's the home front that takes center stage in the multilayered sixth installment of the story of Harry Potter. Here at Hogwarts, Harry will search for the full and complex story of the boy who became Lord Voldemort--and thereby find what may be his only vulnerability.

Sequel to: Harry Potter and the Order of the Phoenix.

Harry searches for the full and complex story of the boy who became Lord Voldemort, and thereby finds what may be his only vulnerability.

(Intermediate, Middle School) As Harry enters his sixth year at Hogwart's, the wizarding world is at war: the Ministry of Magic has finally acknowledged Voldemort's existence. Harry prepares for his foretold life-or-death battle with the Dark Lord while carrying on with classes, Quidditch, and adolescent romance. Narrator Jim Dale's admirable performance is largely consistent with previous audio versions in this series, though the production has a somewhat rushed feel, and a few of the characters (notably Ginny Weasley) are difficult to distinguish -- perhaps understandable given the enormous cast. But for the most part, the voices that Dale has perfected through the first five books will continue to captivate listeners here. (c) Copyright 2010. The Horn Book, Inc., a wholly owned subsidiary of Media Source, Inc. No redistribution permitted. All rights reserved.