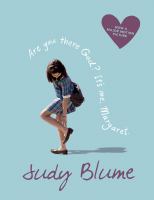 Are You There God? It's Me, Margaret [electronic resource] :

The beloved coming-of-age novel from the author whose "name has long been synonymous with young adult fiction" ( Los Angeles Times ). <br> <br> " Are You There God? It's Me Margaret is very special." -- Amy Poehler (Vulture) <br> <br> "Generations of teenage girls have grown up reading the tales of teenage angst told by beloved author Judy Blume." -- Mashable <br> <br> Margaret Simon, almost twelve, has just moved from New York City to the suburbs, and she's anxious to fit in with her new friends. When she's asked to join a secret club she jumps at the chance. But when the girls start talking about boys, bras, and getting their first periods, Margaret starts to wonder if she's normal. There are some things about growing up that are hard for her to talk about, even with her friends. Lucky for Margaret, she's got someone else to confide in . . . someone who always listens.<br> <br> "The first Judy Blume books I read. . . served as a kind of introduction to myself." -- John Green quoted in The New York Times <br> <br> "Mention Judy Blume to almost any woman under a certain age and you're likely to get this reaction: Her face lights up, and she's transported back to her childhood self -- curled up with a book she knows will speak directly to her anxieties about relationships, self-image and measuring up." -- NPR <br> <br> "Fans, readers, booksellers -- even other authors and celebrities -- often dissolve into tears upon meeting [Judy Blume], confessing that books like "Forever ... " and "Are You There, God? It's Me, Margaret" got them through adolescence; taught them about sex, love and friendship; and provided their first glimpse of adulthood." -- The New York Times <br> <br> "Blume wasn't the first writer to legitimize and celebrate the interior life of young girls. . . . But Blume's work feels significantly more influential than that of her predecessors and peers." -- The New Yorker <br> <br> "These stories belong to young women. Real young women." -- Diablo Cody, Entertainment Weekly

<opt> <anon I1="BLANK" I2="BLANK">Are you there God? It's me, Margaret. We're moving today. I'm so scared God. I've never lived anywhere but here. Suppose I hate my new school? Suppose everybody there hates me? Please help me God. Don't let New Jersey be too horrible. Thank you. We moved on the Tuesday before Labor Day. I knew what the weather was like the second I got up. I knew because I caught my mother sniffing under her arms. She always does that when it's hot and humid, to make sure her deodorant's working. I don't use deodorant yet. I don't think people start to smell bad until they're at least twelve. So I've still got a few months to go. I was really surprised when I came home from camp and found out our New York apartment had been rented to another family and that we owned a house in Farbrook, New Jersey. First of all I never even heard of Farbrook. And second of all, I'm not usually left out of important family decisions. But when I groaned, "Why New Jersey?" I was told, "Long Island is too social-Westchester is too expensive-and Connecticut is too inconvenient." So Farbrook, New Jersey it was, where my father could commute to his job in Manhattan, where I could go to public school, and where my mother could have all the grass, trees and flowers she ever wanted. Except I never knew she wanted that stuff in the first place. The new house is on Morningbird Lane. It isn't bad. It's part brick, part wood. Also, there is a very nice brass knocker. Every house on our new street looks a lot the same. They are all seven years old. So are the trees. I think we left the city because of my grandmother, Sylvia Simon. I can't figure out any other reason for the move. Especially since my mother says Grandma is too much of an influence on me. It's no big secret in our family that Grandma sends me to summer camp in New Hampshire. And that she enjoys paying my private school tuition (which she won't be able to do any more because now I'll be going to public school). She even knits me sweaters that have labels sewed inside saying MADE EXPRESSLY FOR YOU...BY GRANDMA. And she doesn't do all that because we're poor. I know for a fact that we're not. I mean, we aren't rich but we certainly have enough. Especially since I'm an only child. That cuts way down on food and clothes. I know this family that has seven kids and every time they go to the shoe store it costs a bundle. My mother and father didn't plan for me to be an only child, but that's the way it worked out, which is fine with me because this way I don't have anybody around to fight. Anyhow, I figure this house-in-New-Jersey business is my parents' way of getting me away from Grandma. She doesn't have a car, she hates buses and she thinks all trains are dirty. So unless Grandma plans to walk, which is unlikely, I won't be seeing much of her. Now some kids might think, who cares about seeing a grandmother? But Sylvia Simon is a lot of fun, considering her age, which I happen to know is sixty. The only problem is she's always asking me if I have boyfriends and if they're Jewish. Now that is ridiculous because number one I don't have boyfriends. And number two what would I care if they're Jewish or not? Excerpted from Are You There God? It's Me, Margaret by Judy Blume All rights reserved by the original copyright owners. Excerpts are provided for display purposes only and may not be reproduced, reprinted or distributed without the written permission of the publisher.</anon> </opt>