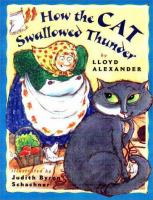 How the cat swallowed thunder /

Mother Holly is tired of Cat's rascally ways. When going out one day, she tells him she doesn't want to see one thing out of place in the house upon her return. Quicker than a cat can pounce, he is in trouble. One mishap leads to another and another. For, unbeknownst to the cat, Mother Holly is no ordinary granny. Her watering can produces spring showers, her bellows bring on the wind, and her popping corn makes thunder. Even when one tiny kernel is swallowed by the cat, it continues to rumble softly in his throat.There is a lot of magic here--not only in Mother Holly's objects but also in Alexander's tart, pithy prose and Schachner's hilarious illustrations. Readers will join Mother Holly in slipping under the spell of that irresistible purring.

Warned not to get into his usual mischief, Mother Holly's cat tries to tidy up all the mess he has made while she is away.

In this amusing pourquoi tale, Mother Holly instructs Cat to clean the cottage while she's out. The lazy Cat longs to nap, but his plans are thwarted by one magical mishap after another. The colorful artwork shows the bemused feline dealing with a rainstorm, a swift wind, peals of thunder, and a blizzard--all inside the house. Readers will be delighted by Cat's exploits, which explain how he gets his purr. From HORN BOOK Spring 2001, (c) Copyright 2010. The Horn Book, Inc., a wholly owned subsidiary of Media Source, Inc. No redistribution permitted.