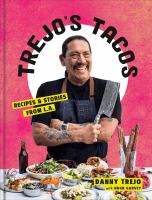 Throughout Danny's life, sharing good food has always been essential--whether it was home-cooked meals made by his mom while imagining the menu for their dream restaurant or whipping up post-wrap celebratory tacos for his Hollywood friends.<br> Now, with his own restaurant empire growing, Danny shares his favorite recipes for bold, fun, and versatile Mexican food by way of L.A. You'll come away with the know-how and skills for cooking slow-braised pork shoulder with bacon and chiles for unbelievably flavorful carnitas, turning spiced fried chicken or Mexi-falafel into tacos and burritos, and how to make cotija and chile mashed potatoes that will impress all your friends (especially when served with brisket!).<br> The book also includes stories about Danny's lifelong love of food, from the meals his mom made when he was growing up in the San Fernando Valley to a map of his favorite restaurants and hangouts in Los Angeles, how his time in prison led to his acting career and opening a restaurant, and his journey of becoming an AA/NA counselor. Like Danny's restaurants, Trejo's Tacos is generous, hospitable, and symbolic of L.A.'s vibrant Latino culture.

The legendary actor and L.A. restauranteur shares his favorite&#x2014;and badass&#x2014;recipes for bold, fun and versatile Mexican dishes along with stories about his lifelong love of food, in this cookbook that is symbolic of L.A.'s vibrant Latino culture.

Table of contents provided by Syndetics

Trejo has ascended from veteran actor to established restaurateur, with Trejo's Tacos and Trejo's Coffee & Donuts becoming must-visit Los Angeles institutions. In this cookbook, he shares 75 of his favorite recipes, from his signature donuts to margaritas, and everything you'd eat in between. For many recipes, he begins with a "master recipe" based on the type of meat featured, which can be repurposed in various ways, including tacos, bowls, and burritos. Vegetarians and vegans should not fret as many of the tacos, entrees, and sauces feature plant-based ingredients. There are even some surprises, like chicken tikka tacos and an entire chapter on "Food That Isn't a Taco." Vivid photographs by Anderson are featured throughout. Also included are autobiographical reflections on the actor's life, along with helpful advice on cooking and ingredient selection. VERDICT Readers will find Trejo's cookbook, like his acting roles, to be a solid effort which does not hold back nor disappoint.--Jennifer Clifton, Indiana State Lib., Indianapolis