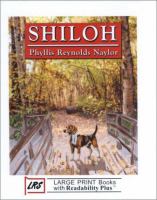 MARTY WILL DO ANYTHING TO SAVE SHILOH When Marty Preston comes across a young beagle in the hills behind his home, it's love at first sight -- and also big trouble. It turns out the dog, which Marty names Shiloh, belongs to Judd Travers, who drinks too much and has a gun -- and abuses his dogs. So when Shiloh runs away from Judd to Marty, Marty just has to hide him and protect him from Judd. But Marty's secret becomes too big for him to keep to himself, and it exposes his entire family to Judd's anger. How far will Marty have to go to make Shiloh his?

When he finds a lost beagle in the hills behind his West Virginia home, Marty tries to hide it from his family and the dog's real owner, a mean-spirited man known to shoot deer out of season and to mistreat his dogs.

A young boy saves a mistreated dog by facing down a bullying adult and standing on principles he knows are right - in the face of laws that may be wrong. Narrated in a believable rural southern voice, the reminiscence engages the reader's sympathy. Credible plot and characters, a well-drawn setting, and nicely paced narration. From HORN BOOK 1991, (c) Copyright 2010. The Horn Book, Inc., a wholly owned subsidiary of Media Source, Inc. No redistribution permitted.