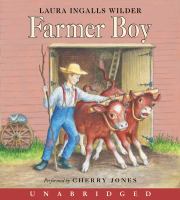 <p>The Story of a boy named Almanzo Wilder...While Laura Ingalls grows up on the western prairie, a boy named Almanzo Wilder is living on a farm in New York State. Almanzo and his brother and sisters work at their chores from dawn until supper most days -- no matter what the weather. There is still time for fun, though, especially with the horses, which Almanzo loves more than anything.</p><p> Farmer Boy is the third book in the Laura Years series.</p>

At the end of the nineteenth century, nine-year-old Almanzo lives with his family on a big farm in New York State where he raises his own two calves, helps cut ice and shear sheep, and longs for the day he can have his own colt.