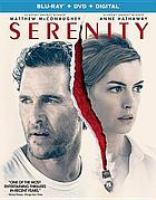 Writer-director Steven Knight’s neo-noir psychological thriller features Matthew McConaughey as a fishing boat captain working as a tour guide at Plymouth Island. His idyllic existence is disrupted when his ex-wife (Anne Hathaway) re-enters his life with the desperate request that he murder her wealthy and abusive husband and dispose of the body at sea. ~ Augustine Chay, Rovi

A fishing boat captain's life is thrown into disarray when his ex-wife suddenly appears begging him to save her and their son from her new abusive husband by taking him on a fishing trip and throwing into the ocean to be eaten by sharks.

In English with optional Spanish subtitles.