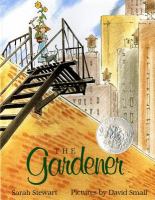 <p> By the author-and-illustrator team of the bestselling The Library </p> <p>Lydia Grace Finch brings a suitcase full of seeds to the big gray city, where she goes to stay with her Uncle Jim, a cantankerous baker. There she initiates a gradual transformation, bit by bit brightening the shop and bringing smiles to customers' faces with the flowers she grows. But it is in a secret place that Lydia Grace works on her masterpiece -- an ambitious rooftop garden -- which she hopes will make even Uncle Jim smile. Sarah Stewart introduces readers to an engaging and determinedyoung heroine, whose story is told through letters written home, while David Small's illustrations beautifully evoke the Depression-era setting.</p> <p> The Gardener is a 1997 New York Times Book Review Notable Children's Book of the Year and a 1998 Caldecott Honor Book.</p>

A series of letters relating what happens when, after her father loses his job, Lydia Grace goes to live with her Uncle Jim in the city but takes her love for gardening with her.

(Intermediate) Michael Dorris's adult novels Yellow Raft in Blue Water and Cloud Chamber chronicle the deceptions and betrayals that nearly destroy a family, generation after generation. Yellow Raft in Blue Water moves from the present generation of fifteen-year-old Rayona back through two generations of women on her maternal side, while Cloud Chamber opens in nineteenth-century Ireland and moves forward through five generations of Rayona's paternal family. Whereas these two books convey how suffocating and harmful relationships can be, The Window throws itself open to the strengths of familial bonds. From the moment eleven-year-old Rayona sits by the window waiting for the return of her frequently delinquent mother, this novel pulsates forward with an energy and wit that never falters. In lively contrast to Dorris's more somber historical novels for children, the seemingly cocky but vulnerable and emotionally needy Rayona narrates this short novel with a breezy, spunky voice. When her Indian mother does not return from her latest binge to declare their usual "National Holiday" (on which she and Rayona can eat breakfast for supper and practice being best friends), Rayona's philandering black father informs her that her mother has checked into a rehab center, but that he is unable to care for Rayona. Her foster placement with the relentlessly cheerful Potters (Rayona is amazed to discover that "there are actual people like this who aren't on a weekly sitcom") proves short-lived and disastrous; placement with the stolid Mrs. Jackson turns to unexpected fun for them both but is likewise cut short. Rayona senses that her father, in talking with her about his family (with whom she will live next) is "leaving something out, some detail, some secret within a secret, but I am so anxious to find out what happened next, to get to the 'me' part, that I let it go by." The Window is all the "me part," keeping the exuberant narrator squarely in the middle as she finds her place in the secrets of her family. Rayona soon learns that her grandmother (her father's mother) is white-a fact he tells Rayona when he is taking her to meet her grandmother for the first time. Rayona resolves not to miss another word for the rest of her life. Sitting in the window seat of the airplane, she understands that she will never again "be able to look out a small window and see [her] whole world from it." With the introduction of Rayona's great-grandmother, the ancient and proper Mamaw, her sensible and wise Aunt Edna, and her grandmother Marcella (a "vanilla Hostess cupcake" of a woman), Dorris's novel becomes yet more unguarded as these three women embrace their young relative with unconditional love. No scene feels more genuinely celebratory than when her aunt and grandmother travel west with Rayona to return her home. Having installed a device atop their car to provide cool air-a contrivance that re-quires the windows to be rolled up-the three must shout to be heard, causing a cacophony of "beg your pardons." When Grand-mother opens the window, thinking to be chastised but instead winning the approval of everyone as the cooler sails away, all three break into hilarity and song. Without glos-sing over the hurt and pain of parental abandonment, this novel of open win-dows is a joy, a "national holiday" to which we can return any day of the week. s.p.b. Picture Books Marc Brown Arthur's Computer Disaster; illus. by the author (Preschool, Younger) Arthur knows he's not supposed to be using his mother's computer, but the lure of Deep, Dark Sea, "the greatest game in the universe," is irresistible. Predictably, the computer breaks; luckily, it's easy to fix; reassuringly, Mom is not mad, just disappointed. She decrees that there will be no computer gaming for a week-at least for Arthur: "'I'll be right up,' called Mom. 'As soon as I blast these skeletons from the treasure chest.'" "Adapted by Marc Brown from a teleplay by Joe Fallon," this story of mild disaster followed by mild reproof will be a pleasant diversion for fans of the popular TV personality. r.s. Eve Bunting Ducky; illus. by David Wisniewski (Preschool) David Wisniewski's Caldecott-winning paper-cutting talents get a comedic workout here, illustrating Bunting's slightly sly text about a plastic duck who, along with thousands of fellow bathtub toys, is washed overboard when a storm hits the freighter ferrying them across the ocean (Bunting supplies a note about the factual event that inspired the story). The duck tells the story ("Our ship has disappeared. The sea is big, big, big. Oh, I am scared!"), including an unfortunate encounter with a shark ("It shakes its head and spits us out. I expect we are not too tasty, though we are guaranteed non-toxic") and the basic existential dilemma of a bathtub toy out of its element: "I wish we could swim and get away. But all we can do is float." The ocean's currents eventually bring the duck to shore alongside many of his compatriots, and he finally achieves his destiny, floating in the security of a bubblebath. This is an out-of-the way excursion for both author and illustrator, and if Wisniewski's pictures are sometimes too weighty for Bunting's buoyant text, they are certainly splashy enough. r.s. H Peter Collington A Small Miracle (Younger) The creator of On Christmas Eve (reviewed 11/90) revisits that significant night in another masterfully executed wordless picture book. The artist's trademark sequential frames make the experience of turning the pages like watching a movie; this time it's a gripping, matter-of-factly magical story of charity and selflessness rewarded. In the midst of a bustling, prosperous contemporary village, a desperate old woman loses every-thing when she sells her sole prized possession-her accordion-and then is robbed. On her way home, she encounters the same thief attempting (c) Copyright 2010. The Horn Book, Inc., a wholly owned subsidiary of Media Source, Inc. No redistribution permitted.