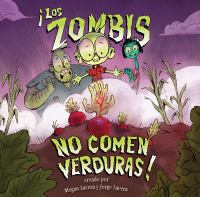 <p>Mo Romero is a zombie who loves nothing more than growing, cooking, and eating vegetables. Tomatoes? Tantalizing. Peppers? Pure perfection! The problem? Mo's parents insist that their niño eat only zombie cuisine, like arm-panadas and finger foods. They tell Mo over and over that zombies don't eat veggies. But Mo can't imagine a lifetime of just eating zombie food and giving up his veggies. As he questions his own zombie identity, Mo tries his best to convince his parents to give peas a chance.</p> <p>Super duo Megan and Jorge Lacera make their picture-book debut with this sweet story in Spanish about family, self-discovery, and the power of acceptance. It's a delectable tale that zombie and nonzombie fans alike will devour.</p>

Although Mo's parents insist he eat zombie cuisine, Mo craves vegetables and strives to get them to taste recipes made from his hidden garden. Includes recipes.

Young zombie Mo Romero has an absolutely despicable craving: vegetables. His parents prefer such delicacies as brain-and-bean tortillas. Even when Mo prepares a meal for them of gazpacho disguised as blood bile bisque, it doesnt win them overat least not at first. This Halloween take on a be-yourself storywith occasional, naturally integrated Spanishis full of wordplay both in the text (Holy aioli!) and in the muted digital illustrations (RIP Juan Moortime, reads a gravestone). Recipes are appended; zombie finger foods, anyone? Concurrently published in Spanish as Los zombis no comen verduras! shoshana flax September/October 2019 p.51(c) Copyright 2019. The Horn Book, Inc., a wholly owned subsidiary of Media Source, Inc. No redistribution permitted.